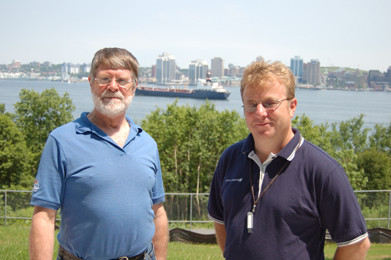 Taking a break from the Digital Commissioning of a new LST installed EV6/Audio Surface. Pictured here are Paul Picard, Technical Engineer from Wheatstone in North Carolina and Lloyd Smith of LST.

LSTechnologies was launched as an Audio and Technical Service in commercial and broadcasting with early focus on development of audio technology for installation and use by Municipalities of Argyle and Clare and the Town of Kentville. The company branched out in 2007 by being awarded a contract to install the completely relocated Nova Scotia Community College Radio Arts Program and studios from Kingstec Campus in Kentville to the new Dartmouth Waterfront facilities. Since that time LSTechnologies has continued to expand and to provide audio and technical services, including maintenance at Kingstec, Annapolis and the Waterfront Campuses.

In addition the company has installed audio and acoustic systems at Kingstec Campus in Kentville, the Annapolis Campus in Middleton and Kings College in Halifax and audio and video systems at Saint Mary’s Basilica and the University of Kings College in Halifax. More recently LSTechnologies refurbished a broadcast console for the Waterfront Campus of NSCC Radio Arts Program under contract for use at the 2013 East Coast Music Awards in Halifax as well as installing a Low Power FM broadcast system for use by the 2013 ECMA’s.

LSTechnologies operates in close partnership with MediaVoice Productions of Brooklyn, West Hants, as the primary technical service provider for low power FM broadcast installations at Baptist Churches in Aylesford and Bedford as well as the Campus Station at St. FX University in Antigonish, Nova Scotia.

More recently, to our Church installations, we have just completed the installation of studios at Faith Baptist Church in Sydney with the installation of a new Air-4 Master Contol Room Console and Arc 8 Production Console – both complete with phone hybrids and audio distribution system, studio interlink and, as of February 1st the church is now in full stream mode, in anticipation of going on air, LPFM, in about a year which LSTechnologies will spearhead in association with MediaVoice Productions.